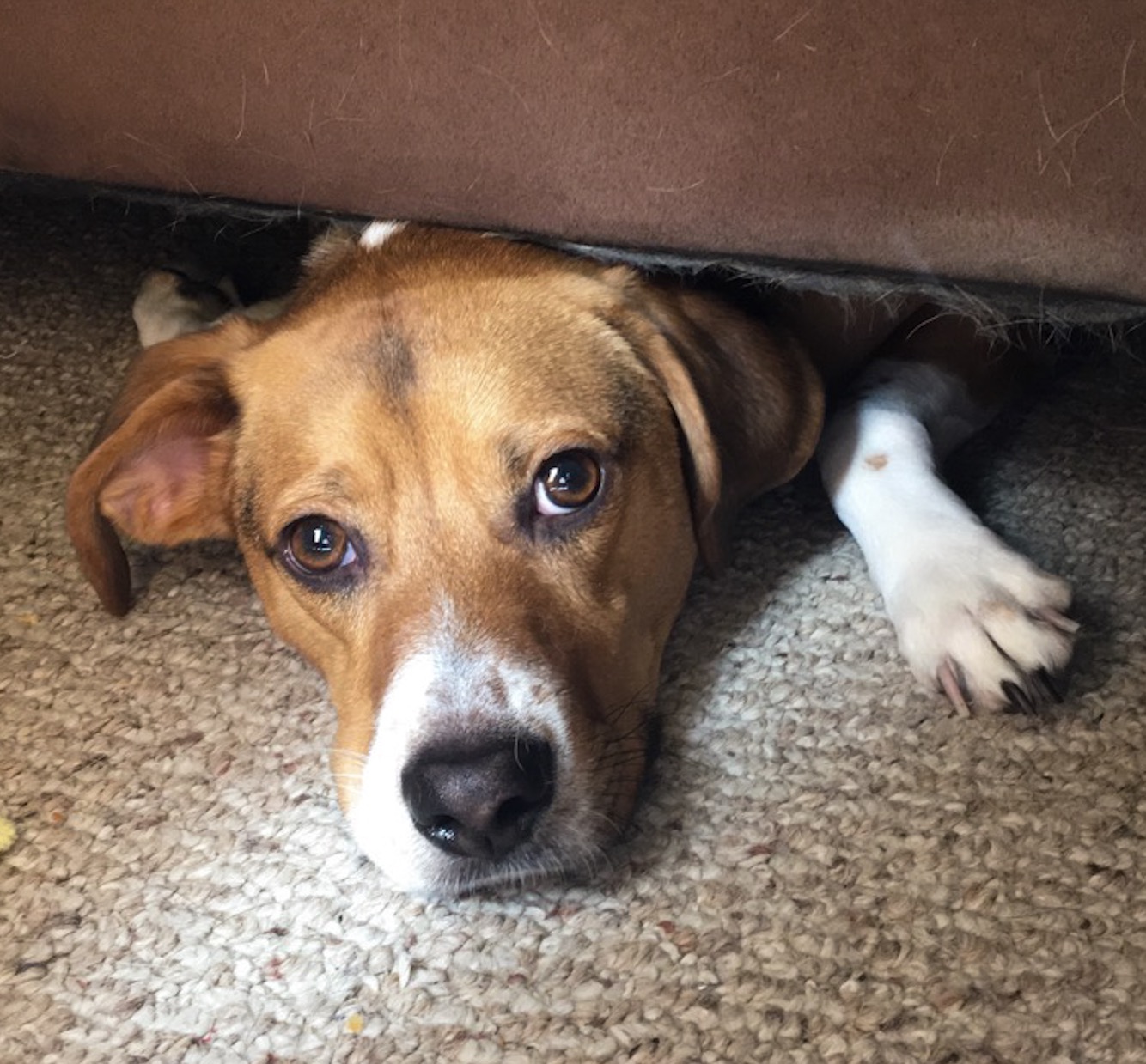 Last week, my friend hit me up and asked if I could help bake some vegan stuff for a work potluck. I enthusiastically agreed, and then proceeded to annoy the crap out of her by sending idea after idea, and link after link. For real, if you ask me for baking help, be prepared for 100x the appropriate levels of excitement. Since we’re right in the middle of Fall right now, I was determined to find Fall-themed food, and we decided to go with mini vegan pumpkin pies. Apart from the fact that I’m always happy to bake for someone rather than having a massive amount of food at home that I gloomily wonder will ever get eaten, having people come over and bake is a fantastic form of exposure for my beagle mix, Pascal, as well. 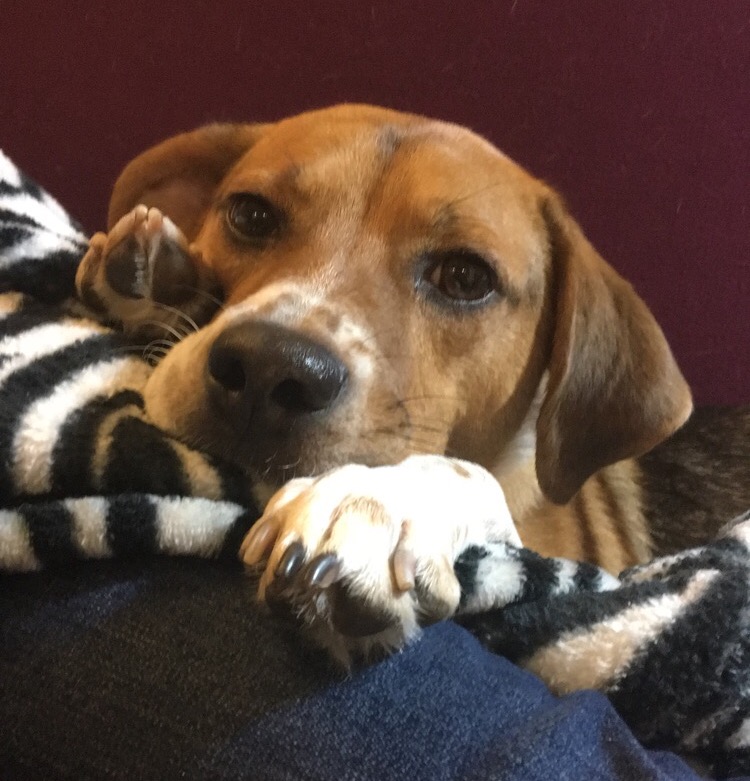 You see, Pascal, as loving, and smart, and all-around awesome as he is, also suffers from some pretty serious anxiety. My dad often jokes that, rather than being my emotional support animal, I’m his emotional support human. Pascal has been anxious ever since I rescued him as a wee pup, around 3 months old, from Good Karma Puppy Rescue. I know very little about his early life. I do know that he was rescued with his litter and his momma, who appeared to be mostly Brittany Spaniel, and that I was told that they were found locked in a barn in Tennessee. I don’t know if he ever saw a single human during that time, or if he did but those humans were mean to him. Regardless, people and the big wide world have always been scary for him.

For the first few months I had him, Pascal would start to visibly tremble and shake if we went outside. Walks consisted of us pulling him behind us on the way out, and as soon as we looped back around to go home, he’d army crawl (literally, belly down, paws scrambling like he was doing a breast stroke) all the way home. If any people that weren’t my housemates came in, the shakes would start again, and he’d dive under the couch and refuse to emerge for their entire stay. Food was pointless. He mostly didn’t like food. He still doesn’t care much for food, and instead of worrying he eats too much, I have to check that he at least ate half his food on any given day. I can’t really complain about that – it’s the reason why I can take pictures of a dog with food without the food disappearing! 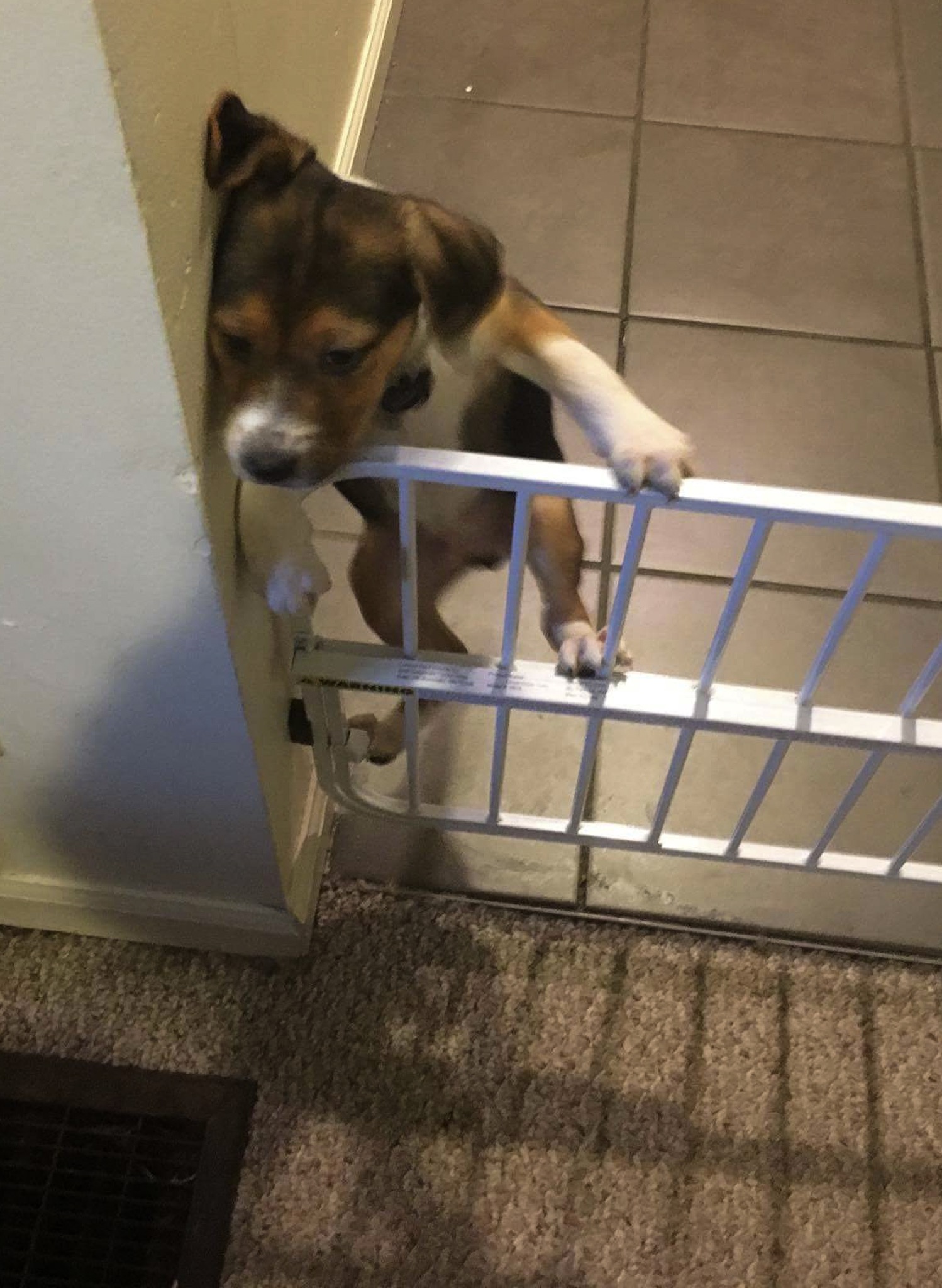 Despite his skittishness, he’s a hugely energetic and entertaining dog when he’s in his comfort zone. I once had a vet ask me if I wanted another dog because he’s not doggish enough. It led to an extremely awkward exchange during which my brain couldn’t really process what she was asking and I kept repeating “but he’s my dog.” We never saw her again. He’s plenty doggish when he’s not anxious, thank you very much. He constantly has the zoomies. Probably because walks are anxiety-inducing and therefore not quite the release of energy they should be. He LOVES to play. I walk in the door after work, and if I dare not give him my full attention for 5 minutes, he’s got a toy and he’s shoving it into my lap and doing a whiny-growl. Stuffed toys are his favorite; they never last more than a few minutes. And he’s a ridiculously resourceful dog. He hated being separated from my housemates and I when we first got him, and despite our best efforts to keep him confined to the tiled half of our house while we were potty-training him, he learned how to climb over and squeeze through 3 different gates in a month despite our best puppy-proofing efforts. 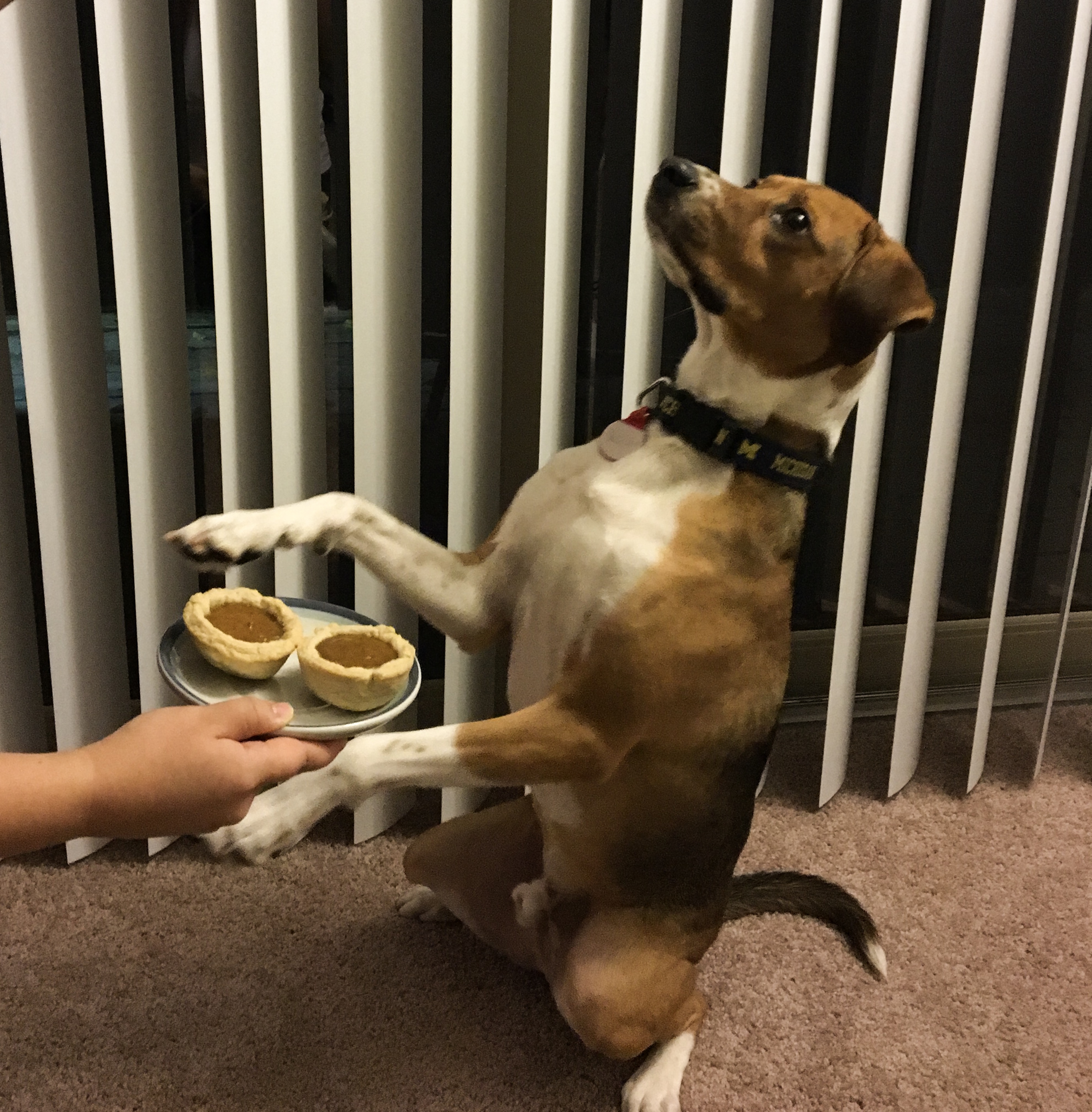 Anyway, getting back on topic, to help him gain confidence, I do a lot of training with him (it’s his favorite form of playtime) and expose him to new people in environments that draw him out from his safe places. Now that he’s improved considerably (he’s been off of Prozac for a couple months. Yes, he was on puppy Prozac), food is exciting enough that, if it smells good, he’ll come out and investigate after a while. In the case of our delicious mini vegan pumpkin pies, it took about a half hour after we started, at which point I opened the can of pumpkin puree. Pumpkin puree is a treat he gets sometimes, so he thought it was his food. Poor pupper! He did get a small spoonful. Baking something that was vegan was a pretty new experience for me. I love my eggs and butter and it always makes me a bit antsy and worried when I have to not use them. Luckily, you don’t need eggs for pumpkin pie anyway so there’s no issue of “will it rise?” Pie crust, on the other hand, relies heavily on butter. I was pretty dubious that shortening could be substituted, but it turned out perfectly ok! The only difference was that it browned a bit less than normal pie crust, and was lacking the nutty flavor that comes from browning. It was, however, still delightfully flaky. As our final point of success, Pascal even let us take a picture of him while my friend was in the apartment. In fact, my friend was even the one who took the picture! 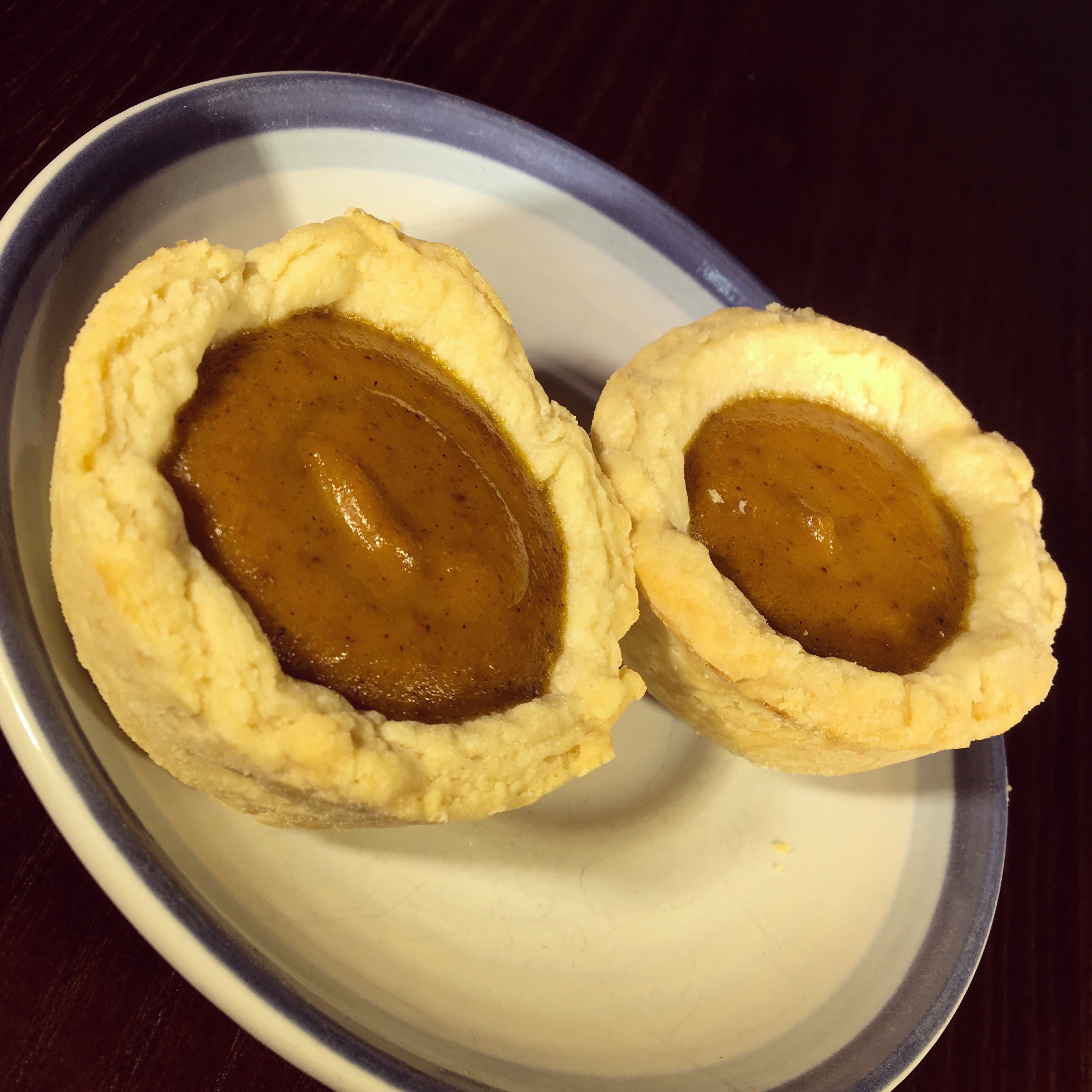 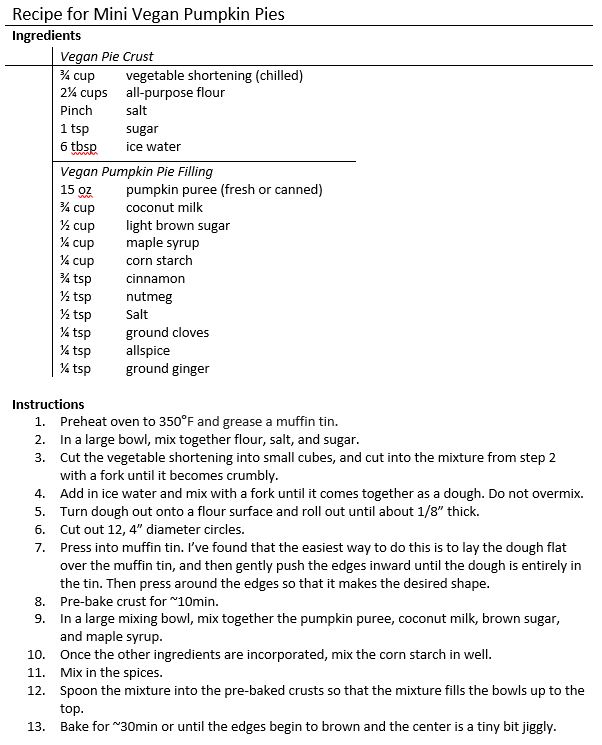 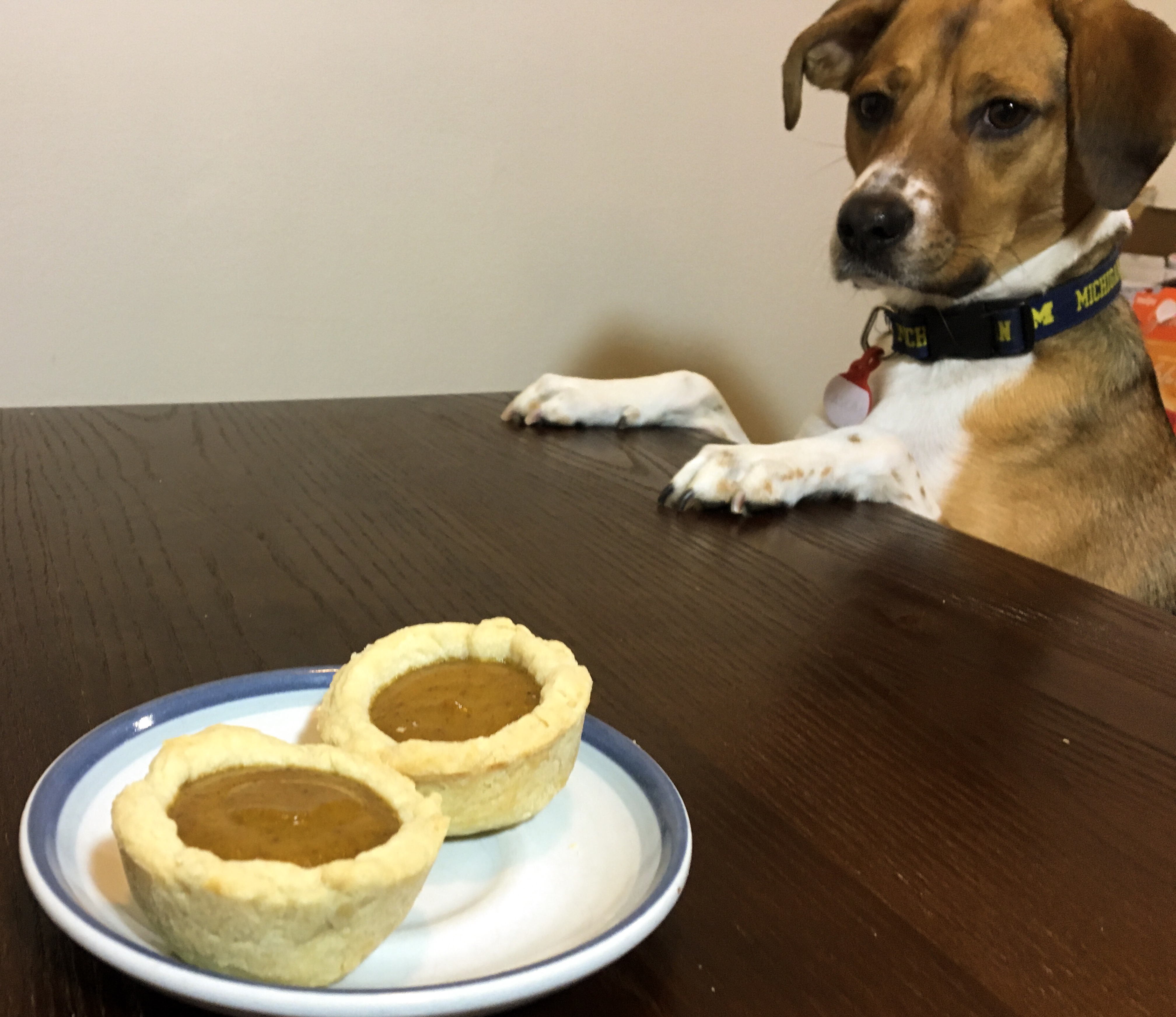 Written by: Doggone Baking: the baking adventures of a girl and her dog