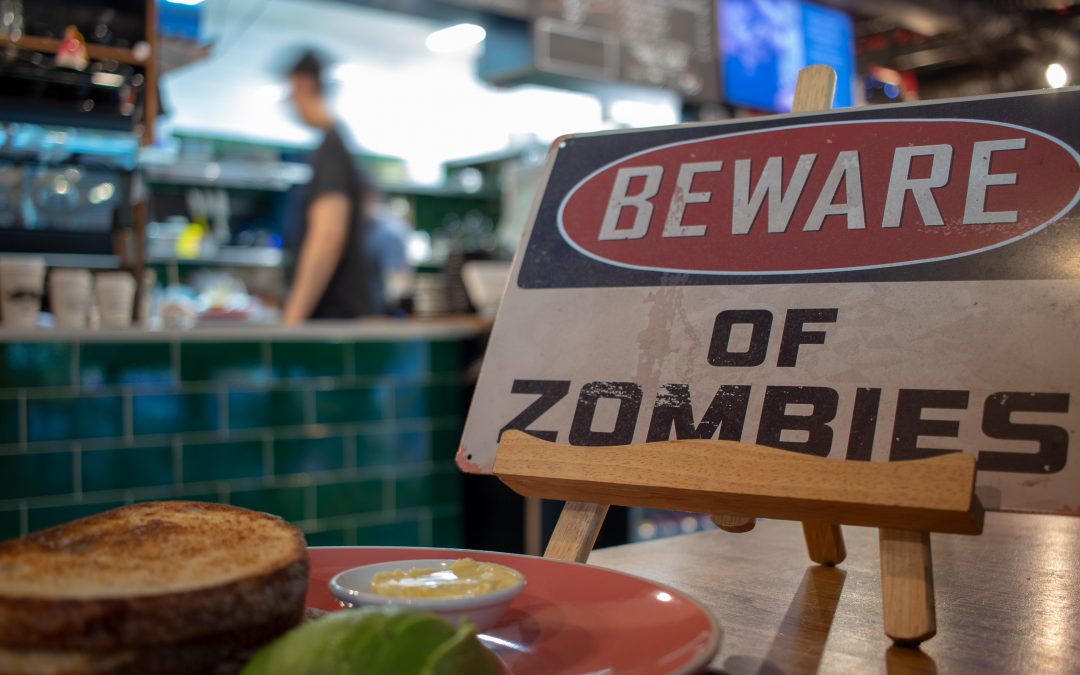 People LOVE zombies and zombie movies. This is just a fact. If they didn’t then zombie TV shows wouldn’t continue to stay on the air long after the plots run out. However, it’s purely speculation that there will never be a zombie apocalypse. Not the kind everyone thinks about like in the movies. I wonder if people understood the differences between a zombie virus and behavioral addiction, if it would scare them to know how eerily similar the two things are?
Outside of the general run of the mill zombie creation ideology being a virus contaminated host verse us, as people uninfected, tipping over our brains regular threshold for homeostasis functions; behavioral addictions do turn people into a zombified state.
Let me show you what I mean –

Both porn addiction and another well known behavioral addiction, gambling, can rewire your brain to be reward center based. This causes you to keep seeking the thrill of the high, through dopamine production in your brain. Much like a zombie is like, “braaaiiins, need more brraaiins,” the addict continues to try to find its next fix; a new source for sustainable fuel.
As both the zombie and addiction precede down the rabbit hole, eventually both lose the ability to see much farther than the chase itself. This causes addicts to make poor work choices or familial decisions. This overtaking of the pleasure center becomes the all being. They lack the ability to focus or hold attention to other tasks, which can prohibit the ability to recall things. Even holding new information eventually digresses because the gray matter of the brain shrinks. Creativity is lost and learning new skills can be 10x more difficult because there is no place to store new knowledge.

WARNING : Irritation can also occur.
People tend to become angry when they can’t get their fix. Have you ever seen a zombie in a movie suddenly learn to run because their food is driving away? This is due again to the shrinking of the brain. It becomes almost a feral like feeling to meet the reward circuits “new” needs. People can become increasingly paranoid or upset by change in routine or having to make comprises that make them miss their fix. This can cause someone who is addicted to the internet or sex to become extremely volatile. They may employ tactics like gaslighting or DARVO. This can make being around them extremely unsafe. Just like a zombie – they attack whoever is closest to them first.

Both addicts and zombies lack the emotional intelligence to “feel” for their victims. When your brain is so one tracked that you can only see its desired substance there is no room for feelings or empathy. Not even sympathy. The numbness of the brain is the result of cutting off the serotonin receptors by all that excess dopamine its striving to produce. The person can no longer bond because the brain stops absorbing those chemicals. Neither a zombie or addict is able to love anything but their obsession. It’s not chemically possible. Lack of understanding can strain relationships and is often what people question first when noticing something is amiss about a loved one.

You would never see a zombie having a tea party would you? No, you wouldn’t.
Just like zombies, addicts lose the ability to be social. This is more than just angry about routine, it’s resentment. They can stop going out or inviting people over. The FOMO (fear of missing out) on being with the addiction or substance becomes so consuming that it causes individual reclusiveness. People who are addicted to screens, only want to be with the screen, people who gamble only want to have money to win more money and zombies need their dear sweet people to snack on which is why they wander around looking for it aimlessly. Being distant can cause loss of friendships, domestic relationships or even effect the ability to parent conductivity.
Nobody else has the right or authority to be with your addiction. It’s private. No friends allowed. The “its mine” fixation can keep anyone at arms length and is especially damaging to marriage. Why be married if you didn’t want to share your life with this other person? It can become a overwhelming divide.

When you see a zombie, it’s pretty easy to tell…
Melting face, maybe they lose an arm in a struggle… And still they press on.
When you see an addict, it can be a bit more challenging. Often it’s not until they stop showering regularly til someone Really takes note. Truth is, anytime you are addicted, the addiction changes your physical appearance. The change in chemical production in your brain can have full body effects! Increased acne, less body hair, weight gain or loss, premature aging and even changing face shape. Most people won’t notice the changes or how drastic they are, until they go to quit. This can come as quite an astonishment to the addict.
Zombies lose total sight of who they are as people, and the same can be said for porn addicts.

Get this amazing Exclusive Interview where I cover the different areas of what you need to know about relationship reconstruction from SSA & BT to get to a healthy relationship!